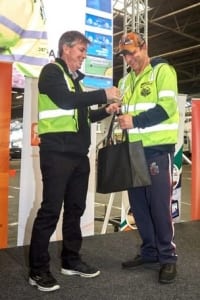 Murray Bros is proud to announce that Lindsay Rosenthal has been awarded third prize at the Brisbane Markets’ Forklift Operator of the Year competition for 2018.

Being the largest concentration of forklifts on any worksite in Queensland, Brisbane Markets places great emphasis of the importance of safety, and this initiative is a fun way to bring safety awareness to the market community.

Competitors had to efficiently and safely navigate their way around a challenging obstacle course, to the cheers of the market crowd, who came not only to encourage their work colleagues, but to raise money at a charity barbeque for the MND and Me Foundation, which supports people and their families living with Motor Neurone Disease in Queensland.

Murray Bros was especially excited to have 3 competitors among the top 10 finalists, so congratulations also goes to Ziggy Chmielarski and Karla Bleakley who also competed well on the day, and who consistently demonstrate our Murray Bros safety culture.

In taking out 3rd place, Lindsay conquered his one concern, which was to keep concentrating despite the large crowd of people cheering and the officials watching his every move. He took home $500 and gave back a heartfelt thank you to Brisbane Markets Limited and sponsors CHEP and Toyota Material Handling for supporting Brisbane Markets’ forklift operators in this fourth year of the challenge. It was also fitting that our Managing Director, Stephen Edwards, was given the task of presenting this year’s recipients with their awards. 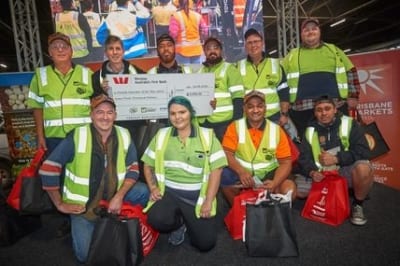 One Stop Shop for Avocado and Kiwifruit Ripening
Scroll to top